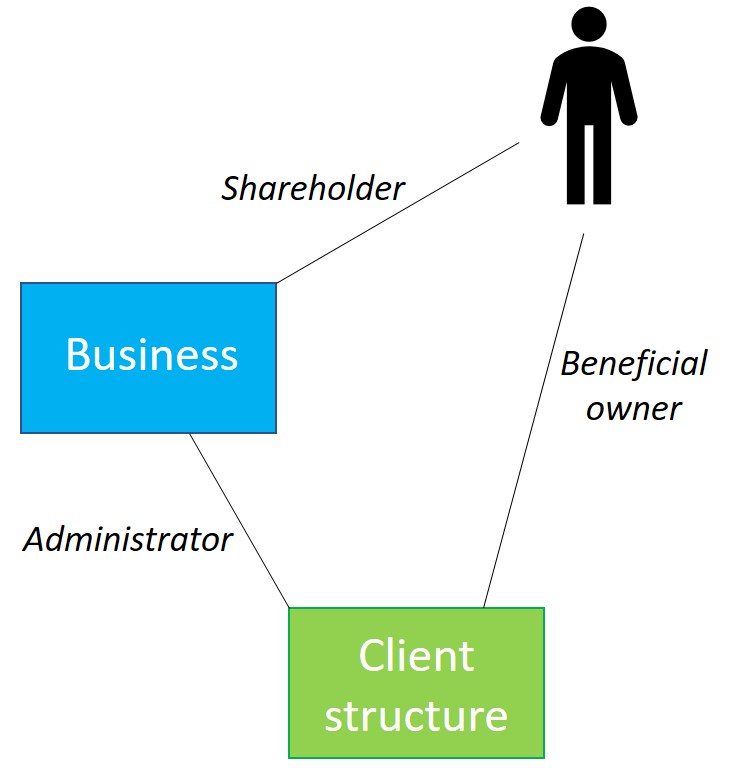 Under our first scenario, a shareholder of the regulated business is also a client of the business.

This is not an uncommon occurrence in Jersey. Take, for example, an instance where a high net worth individual has been the prime mover behind the establishment of a new trust company business, transferring his structures to the new trust company and providing some of the start-up financing in return for a shareholding.

Why is this a conflict of interest?

In such an instance, even where the shareholder-client only has a minority stake in the business, it would be unlikely that he would be treated in exactly the same way as other clients. Shareholders typically have the power to dismiss directors and this would, understandably, put additional pressure on directors such that they could potentially feel unable to query activity over the shareholder-client’s structure. The directors’ ability to exercise independence and objectivity in their decision-making, and hence their ability to fulfil their fiduciary responsibilities, could be compromised.

The conflict of interest would be heightened in the event the shareholder-client had a material stake in the business, or had another form of influence over the business such as lending monies to the business or being a significant introducer of new clients.

This is a particularly tricky conflict of interest to address, especially for those businesses which were founded with the initial aim of servicing a particular client or group of clients.

The directors of the regulated business must be very aware of the conflict of interest and its potential impact on their decision-making each and every time they have to make a decision with reference to the shareholder-client’s structure. The structure should probably be rated as presenting a high level of risk and, as a result, there should be an ample number of directors/senior management involved in every decision. The minutes or resolutions documenting each decision should make full disclosure of the conflict of interest. More generally, the directors should keep a close eye on themselves and each other and, if they are uncomfortable that the conflict of interest is impacting inappropriately on the business, they should formally raise their concerns.

Where the shareholder-client has 10% or more of the business’s share capital or controls the same proportion of voting rights, where he is able to exercise significant influence over the business or give directions to the directors, it will be necessary to obtain the regulator’s confirmation of no objection to the position.

It is possible that the shareholder-client may wish to join the board of the business as a non-executive director. Whilst there is the potential that this could add yet another dimension to the conflict of interest, there is an advantage in that the appointment would facilitate more transparency by allowing the shareholder-client to be mentioned in the business’s literature and website.

As with all conflicts of interest, this conflict of interest must be comprehensively recorded in the business’s register. In this case, as the shareholder-client’s structure will likely be rated as high risk, the structure will be subject to more intensive compliance and management oversight and, potentially, additional independent external review depending on the complexity and nature of the structure.

The next article will look at the situation where a client director holds the same investment as a client structure.