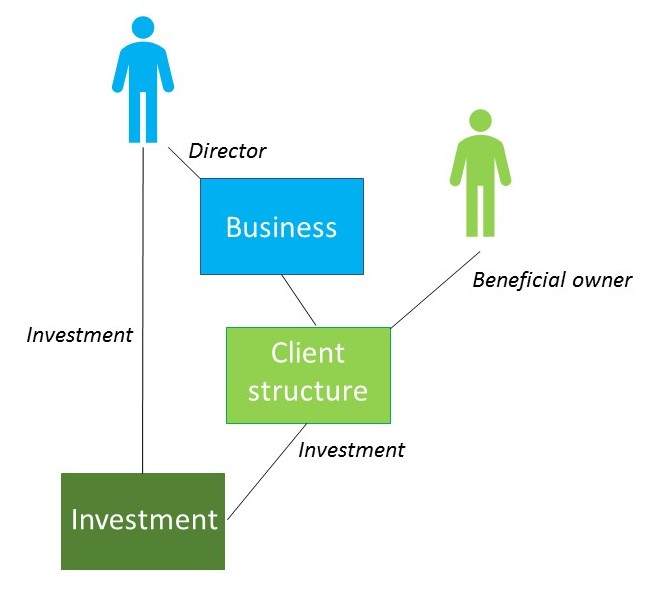 In this example, a director has invested into the same company / joint venture / property development etc as a structure under the administration of the business.

Interestingly, this is a conflict which might be viewed very differently in different jurisdictions and different industry sectors. By way of an example, in the UK, non-executive directors would typically not invest into the funds on whose boards they sit, but in Jersey it is not unusual. And, unlike some other investments, funds tend to have more transparency, because of the prospectus and disclosure requirements and often a larger asset value so a director’s investment would typically be less significant proportionately. We’ll consider the matter from a Jersey perspective and suggest some measures which may assist in managing the conflict of interest. Of course, the measures must always be tailored to fit the precise circumstances, so our suggestions cannot be considered definitive.

Why is this a conflict of interest?

We have, in the past, been told that a client will feel more comfortable when a director has an investment in the same entity or product as it means the director has “skin in the game” and their interests are closely aligned with those of the client i.e. they both want the investment to do well.

Perhaps one of the more useful questions to ask when considering whether or not a particular investment presents a manageable conflict of interest is “How would this be perceived if it all went wrong?” Applying a little thought and common sense to considering the ethics of the situation and how you would feel if it were made public, can be a useful indicator of whether or not a situation is appropriate.

How might the conflict of interest be addressed within a regulated business?

A Jersey-regulated business should have controls in place whereby individuals are not permitted to invest with clients or client structures, or make specified investments, without the prior approval of the board of the service provider (and of the fund board, where appropriate). Such “Personal Account Dealing” controls are particularly important for investment businesses, in order to manage the potential conflict of staff dealing on their own account as well as for clients, but also to mitigate the potential risk of insider dealing and market abuse which is typically higher for investment businesses than other regulated entities (see Part 3A of the Financial Services (Jersey) Law 1998.) The policy should ensure that prior written approval is required for staff trades meeting defined criteria – for example, where the investment is held on a white list or where the investment is held by a client structure or client. This process should ensure that the dealing does not conflict with a client’s interests and does not breach any restrictions in place over dealing in the security (such as a closed period). Of course, the business’s controls in this area should be tested regularly as part of the compliance monitoring programme. Any instances of non-compliance should be escalated and remediated as appropriate, including potential disciplinary action where controls have been bypassed deliberately.

In the case of funds, a director holding an investment in a fund is typically caught by the personal dealing policy, as explained above. If the investment is approved and made, it will likely be appropriate to disclose the investment in the fund prospectus or equivalent documentation, particularly if the fund is listed. Indeed, depending on the nature of the fund there may be a requirement to make a wider disclosure about how conflicts of interest are managed (see, for example, the Investment Management Association Pension Fund Disclosure Code).

Needless to say, as with all conflicts of interest, the business needs to have a robust control framework in place – a comprehensive policy, suitable disclosure in its terms of business, provisions in the staff handbook for the formal disclosure of conflicts (and disciplinary measures in the event of non-disclosure) and regular testing as part of the compliance monitoring programme. The specific matter should be recorded in the business’s conflicts of interest register and disclosed as appropriate in minutes. Finally, it may be necessary for the director to recuse himself from decision-making where he has a personal interest in the investment which is being discussed.

How might the conflict of interest be addressed by a Non-Executive Director (NED)?

The comments above apply where the conflicted individual is an employee of a regulated business and hence is surrounded by a control framework. If the individual is a NED who does not operate as part of a business, but who has invested, for example, into a fund of whose board he is a member, or into an investment which is also held by the fund, the appropriate response might be somewhat different. Whilst the NED would have no executive or signing responsibilities, the conflict of interest could still be perceived to impact upon the independence of his decision-making.

Firstly, the NED should ensure the conflict of interest is logged in the fund’s records (both the minutes and conflicts of interest register) and in the records of the fund administrator/manager, where appropriate.

As noted above, if the fund is listed, it will likely be necessary to notify the markets of the investment. If the fund is regulated, the conflict should be disclosed in accordance with applicable regulation, potentially in the prospectus for example.

It would also be necessary to record the conflict of interest within the NED’s own register, if he maintains one (which he should do, if he is regulated in his own right).

Finally, it hopefully goes without saying that the NED should disclose his conflict of interest where discussing the investment and, potentially, recuse himself from decision-making over the investment holding.

Ultimately, however, the effectiveness of the management of such a conflict of interest will largely rely on the integrity and self-awareness of the NED to be mindful of the potential impact on his conduct.

Nicola began her career with EY, specialising in the audit of regulated entities. In 2005 she joined the Trust Company Business Division of the Jersey Financial Services Commission where she dealt primarily with complex cases. In 2012 she transferred to the Commission’s Enforcement Division and played a major role in a number of the Commission’s most serious and high profile cases. She is a co-founder of Cyan Regulatory Services.
This site uses cookies: Find out more.