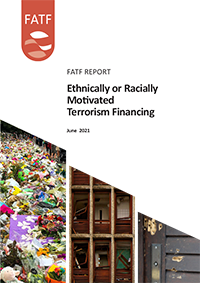 It can be difficult to find useful and relevant information on terrorist financing; money laundering seems to be addressed far more frequently in industry publications and authority reports, reflecting the evolution of international legislation. The Financial Action Task Force (“FATF”) is a very good source of information on terrorist financing, having produced a number of reports over the years. Their most recent report, “Ethically or Racially Motivated Terrorism Financing”, was published last month and addressed what, to me at least, is the less familiar area of the financing of extreme right-wing “ERW” groups and attacks.

I’d recommend that you read the full report which is published on FATF’s website at Documents – Financial Action Task Force (FATF) (fatf-gafi.org). It provides useful information on how ERW groups and individuals generate, move and use funds but I was particularly interested in a couple of themes which were noted.

There is currently no United Nations or other international designation targeting ERW groups and individuals and only a few jurisdictions, such as Canada, have designated ERW groups or individuals domestically as terrorists. There seems to be a trend of increasing government action, but it remains the case that in many jurisdictions ERW groups are entirely free to act.  This is particularly the case for groups which do not openly engage in, advocate for or facilitate violence.

In the absence of any designation or other similar action, groups are able to operate without restriction and without concealing their activities, including financial transactions which are typically not monitored and so may not even be disguised in any way.

Where an ERW group or individual is engaged in criminal activities such as robbery or the abuse of non profit organisations, any transactions linked to these activities should, of course, be reported, notwithstanding whether or not ERW activity is considered, in and of itself, to be terrorist activity. These reports may be used to build an understanding of the group’s or individual’s activities and financial infrastructure which may be important in any decision as to whether to impose a terrorism designation or other action.

FATF’s report noted that “designating ERW actors as terrorist entities can be a powerful tool, preventing them from access to the international financial system and disrupting their public fundraising activities”. It can enable the freezing of assets and a prohibition on parties engaging in transactions with the designated individual or group. Designation also deters would-be supporters and forces groups to expend time and resources in finding new sources of funding and channels for moving funds.

As would be expected, where ERW groups feel they are under scrutiny from authorities, they try to conceal their actions and transactions. For example:

The report also explains that ERW groups are increasingly engaging across national borders and moving funds to show their support for groups in other jurisdictions. Such relationships can be particularly useful where one group has been designated and hence is subject to constraints over funding. In addition, differences in legal regimes governing hate speech may also be exploited with propaganda and other written materials being produced in jurisdictions with less prohibitive regimes, prior to be distributed around the world. Finally, individuals may also travel to support groups and activity in other countries (e.g. individuals travelling to Syria and Iraq to fight ISIL and protect Christian minorities and individuals travelling to Ukraine).

As well as membership fees, private donations and legitimate commercial activities such as the sale of memorabilia, I was interested to read about two legal sources of funding used by ERW groups:

What can we do?

The report obviously focuses on actions that should be taken by governments and authorities to disrupt terrorist financing. It also notes that the majority of terrorist attacks are self-funded or funded by way of private donation and hence that there are often few, if any, red flags with the most useful financial information being discovered only after an attack.

My own view is that the findings set out in the report reiterate the importance of the ongoing monitoring of clients, particularly using online sources including social media. Many ERW actors are entirely free to express their views and ideology and spotting any such expression online can be a useful heads-up, even when it doesn’t amount to a reportable suspicion. It would therefore seem to be worthwhile to see if anything can be learned from Facebook, Twitter and other social media platforms about your clients as part of initial screening processes and regular periodic reviews in order to develop an understanding of the risks that a prospective client may present and maintain up-to-date and comprehensive client profiles, risk assessments and due diligence.

Firms will also be very aware of the potential reputational risk in providing services to ERW groups and individuals. It was interesting that some firms have used provisions on hate speech in their terms of business to exit clients whose conduct they considered to be unacceptable. I would suggest that firms consider where their own limits lie and what client conduct or professed ideologies they would consider to present an unacceptable level of reputational risk for the firm. And of course it’s also possible that initial and more general concerns about potential reputational risks may subsequently crystalise into knowledge or suspicion of money laundering and / or terrorist financing.

All of this should be seen within the context that Jersey considers that the risk of the island being used as conduit for terrorist financing is medium-low, as detailed within the 2021 National Risk of Assessment of Terrorist Financing, published on the gov.je website. However, as the NRA acknowledges, more data and information is required to inform the assessment of the terrorist financing threat and we should not be complacent and assume that Jersey has no role to play in tackling such financing.

Nicola co-founded Cyan in 2014, having spent almost 10 years at the Jersey Financial Services Commission, first in the Trust Company Business Division where she dealt primarily with complex cases, and then in the Enforcement Division where she played a major role in a number of the JFSC's most serious and high profile cases. Prior to joining the JFSC, Nicola qualified as a chartered accountant with EY, specialising in the audit of regulated entities.
This site uses cookies: Find out more.